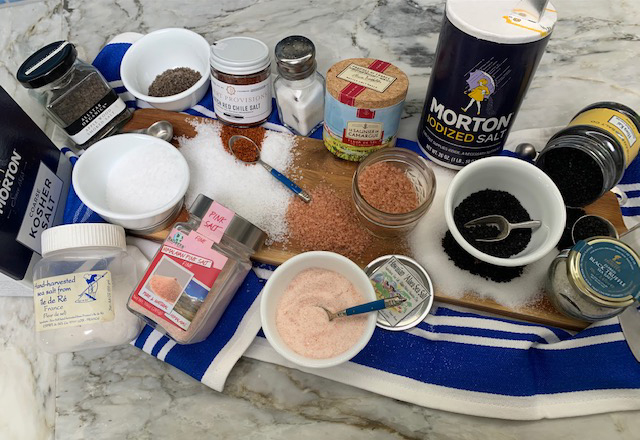 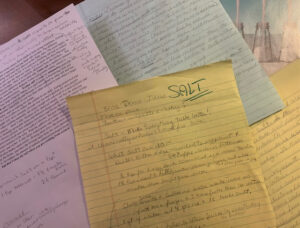 I started doing these updates as a way to stay in touch and give you an idea of my journey writing the cookbook. It’s always been my intention to include cooking tips and ingredient information along with recipes. Through the years I’ve gathered information on salt, and since it is an often asked about topic it seemed a good one to include. There is a lot of information on this subject that would be of interest to most cooks, way more than I’ve included here—and this will need to be condensed if it’s to fit in the book! But for you, here is my rough draft on one subject—Salt!

Salt—The Blessing and Curse of Salt

A regular question I’m often asked about in cooking classes is about salt. Many are concerned about salt intake and so want to know if they could/should reduce the amount of salt in a recipe. The simple answer is usually no, and here’s why. Salt is magic! Simply, it’s the number one ingredient that makes nearly everything we eat taste better, and not just salty. Wanting to reduce our sodium intake is a natural and positive response to dietary concerns over hypertension. Too much sodium can indeed affect it. We live in a time of mass amounts of prepared prepackaged foods, convenient takeout options and huge restaurant portions that are loaded with more salt than you can imagine. However, what researchers found is if fresh food is prepared with minimally processed ingredients the amount of sodium can be reduced up to 77 percent! So I say, cook with as much fresh food as possible, along with low sodium ingredients as needed (tomato sauce and broth come to mind), then feel comfortable adding the salt called for in recipes or to taste.

The Magic of Salt

The old saying that salt brings out the flavor of a dish is true, even very subtle flavors can become detectable. Studies show that we like the taste of salt and the way that it makes most everything else taste better. A sprinkle of salt allows the delicate complex flavors of a roasted squash to come through, and a bit added to a chocolate dish enhances the richness of the chocolate, but also suppresses the bitterness; same with a pinch added to coffee grounds. Think of all the foods that have salt added—bread, cakes, cookies, soup & stews, vegetables and even fruit. It isn’t to make them taste salty; it’s so their taste is enhanced. Imagine a plump juicy tomato without a sprinkle of salt.

Salt makes meat juicier, but can also provide the crisp skin on a chicken. Brining has become a common and very successful to way to ensure your roast turkey or chicken is delicious, and brining a pork tenderloin or thick chop will work wonders. Brining adds moisture, but dry salting meat will not only make the meat juicier, it will result in a well-browned crust. You can also brine dry beans that will result in softer skins. And when cooking green vegetables, adding about 1½ tsp. of salt to a about a quart of water will keep them bright green. For tender scrambled eggs add a pinch of salt just before cooking. We know about using salt when freezing homemade ice cream, but its easy to forget that adding salt to ice water to chill beverages will get the job done faster than ice water alone or even in the freezer—using this suggested formula—1 quart water + 4 quarts ice + 1 cup salt.

Varieties of Salt, Their Differences and Uses

Growing up, the only salt I was familiar with came in a blue round box and was used to fill the little shaker on the table. I remember seeing my mom unscrew the shaker top to measure out a teaspoon or so. Now many of us have a salt crock conveniently located to scoop or finger-pinch some as needed. And of course, the variety of salt offered today can overwhelm a seasoned cook. First and foremost, all salt is basically the same—sodium chloride, with the texture, shape and mineral content being the difference.

Table salt, the most common, is mined like coal and processed into tiny uniformly shaped crystals. It dissolves easily, is easy to measure and is inexpensive. Agents have been added to prevent caking and iodine is added for health concerns, both which can impart a slight flavor.

Kosher salt (named for the preparation of meat to Jewish dietary guidelines) is raked and compacted to yield large flaky crystals. This makes for ease of finger-pinching and sprinkling on foods. It has no additives that can affect the taste.

Note: Surprisingly, kosher salt weighs less by volume, so more kosher salt must be used to get the same effect as table salt. And, to add to the confusion, the 2 main brands of kosher salt—Morton and Diamond—each weigh differently!

Sea salt is created when ocean waters flood shallow beds along coastlines. When the water evaporates it leaves large salt crystals. The different minerals from the surrounding land lend their flavors to the flaky salts. Not often used in cooking because of the expense, but as a “finishing salt” where its delicate crunch can be appreciated. The most highly prized, and expensive is the hand harvested white lacey Fleur de Sel at about $12 for 4 oz.

Often derive their flavors from the minerals deposits left by evaporation. These minerals not only color the salts, but impart their own distinctive flavor, such as, the red salt from Hawaii gets it flavor and color from the iron-oxide in the volcanic clay. Be careful substituting these salts into your cooking, but use instead as a finishing salt.

Smoked salt is actually salt that has been smoked, and it’s the smoke that clings to the crystals that produces its rich brown color and strong smoky flavor. There are many flavored salts available, too many to list here, but my two favorites are Black Truffle Salt and Vanilla Salt. Each can add a subtle depth and richness.

Salted Caramel is all the rage and for good reason, it’s just delicious! This simple recipe is my favorite. Of course its awesome drizzled over ice cream and over a slice of warm apple pie, oh my goodness. I hope you try it!
5 from 2 votes
Print Recipe
Servings 1 cup

Can be made 1 week ahead, covered and chilled, but serve warm.